The mother of a toddler with a weakened immune system is urging people to get vaccinated against measles.

Health authorities are warning Twenty new measles cases per day as Auckland's outbreak worsens and they expect cases to continue to climb for the next two weeks.

The number of people with measles has risen to 963, and 804 of them are in Auckland.

About two weeks after he was born, Ashleigh Playne's son Benjamin was diagnosed with the genetic disorder alpha-1 antitrypsin deficiency leaving him vulnerable to lung and liver disease. 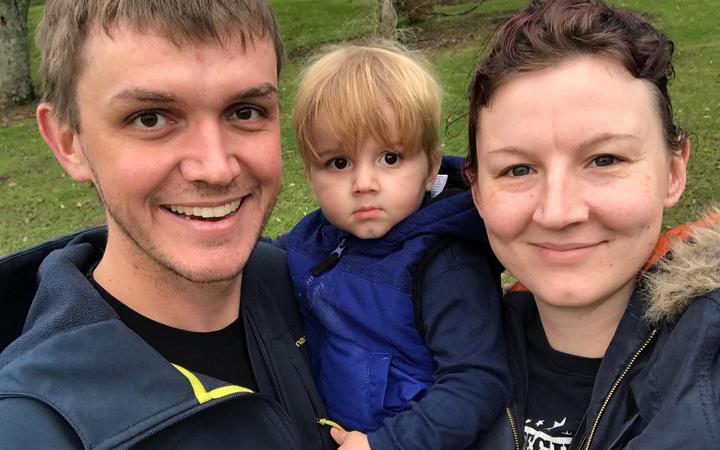 "Essentially for him it's affected his liver and as time has gone on his liver has deteriorated. Up until this point we've probably spent more time in Starship than home."

As he has struggled to fight it she said he had been more susceptible to things like the common cold.

He was put on a liver transplant list about a month ago, and in a few weeks time her husband Matt will be his living donor.

"Post-transplant he'll be on immunosuppressants which will make that even worse and make him even more susceptible to the germs that are in the community," Ms Playne said.

People with immune deficiency cannot get the MMR vaccine and rely on the immunity of others to keep them from getting sick. Ms Playne said that now there was a measles outbreak she was even more concerned about her son.

"I understand that people need to make their own informed choices and they're free to do so but it's very frustrating when you hear comments that are so flippant and that things 'aren't necessary' but your own child is essentially relying on the community's ability to stay vaccinated so that he can stay alive and live a normal life."

She said some people had lost perspective on the personal impact of not getting vaccinated.

"You're actually talking about people's lives, not just a bandwagon to jump on because something you read online said so."

Benjamin Playne, who is set to get a liver from his father Matt, will need immunosuppressants to ensure his body does not reject it. Photo: Supplied / Ashleigh Playne

Health authorities say the country has lost herd immunity against the disease.

Efforts to boost the vaccination numbers have centred on South Auckland where there have been more than 550 confirmed infections - more than half of the country's cases.

Fifty schools have been affected, including Manurewa High School where 300 students were sent homeafter 14 children were confirmed as having the virus.

The principal, Pete Jones, said eight nurses would be at the school today for a vaccination blitz.

"The plan is we're targeting 15-year-olds plus, to get as many of our non-immunised senior students through the on-site clinic.

"The nurses are really positive and really confident that they can really blast through the numbers so potentially we could get through over 300 students today.

While the government and Ministry of Health have set up a coordination centre to help deal with the outbreak there have been calls for a nationwide mass vaccination campaign to plug the gaps where immunisation is low.

Vaccinologist Helen Petousis-Harris has said a targeted mass vaccination campaign is "a total no brainer".

Dr Petousis-Harris told RNZ recent studies had provided estimates of how many were at risk and shown it was cost effective to launch a mass immunisation effort.

"In the past when we've been in this situation before, looking at rising rates and potentially an epidemic, was that there was a mass campaign. This is 1996-97. So it has been done before.

"The solution is relatively simple in that you've just got to close those gaps enough so that we don't get this ongoing transmission. The logistics behind actually achieving that might be a little more difficult.

She said the numbers of cases had not slowed down and if nothing was done about it quickly New Zealand could lose its elimination status. New Zealand was verified by the World Health Organization (WHO) as having eliminated endemic measles and rubella in October 2017.

However in a meeting in July, a WHO committee warned New Zealand its status was at risk in part because of a low rate of domestic immunity in some groups.

The Ministry of Health's Director of Public Health, Caroline McElnay, said the idea of a targeted mass vaccination campaign was being considered but she didn't know when a decision would be made.

"We fully support the need to do something and we know that there's an elevated level of concern certainly in Auckland but it is quite challenging to mount any immunisation campaign. There's a lot of details and logistics that would need to be thought through," Dr McElnay said.

Health authorities continue to urge people to check their vaccination status and get the vaccine if they have not done so yet.