"I didn't do it". "It's all your fault anyway". "Leave me alone". That's the vision of a "new world order" Russian President Vladimir Putin just formally outlined to the United Nations.

His closest friend and ally Alexander Lukashenko, dictator of neighbouring Belarus, has handed a letter to UN Secretary-General Antonio Guterres detailing his and Putin's rationale for the invasion of Ukraine.

Lukashenko repeated Putin's threat that, unless "security guarantees" were forthcoming, the Ukraine war would become "protracted with devastating consequences".

According to the state-controlled Belarusian news agency BelTA, the president urged the Secretary-General to institute a "new world order" under which all sovereign states have "security guarantees". 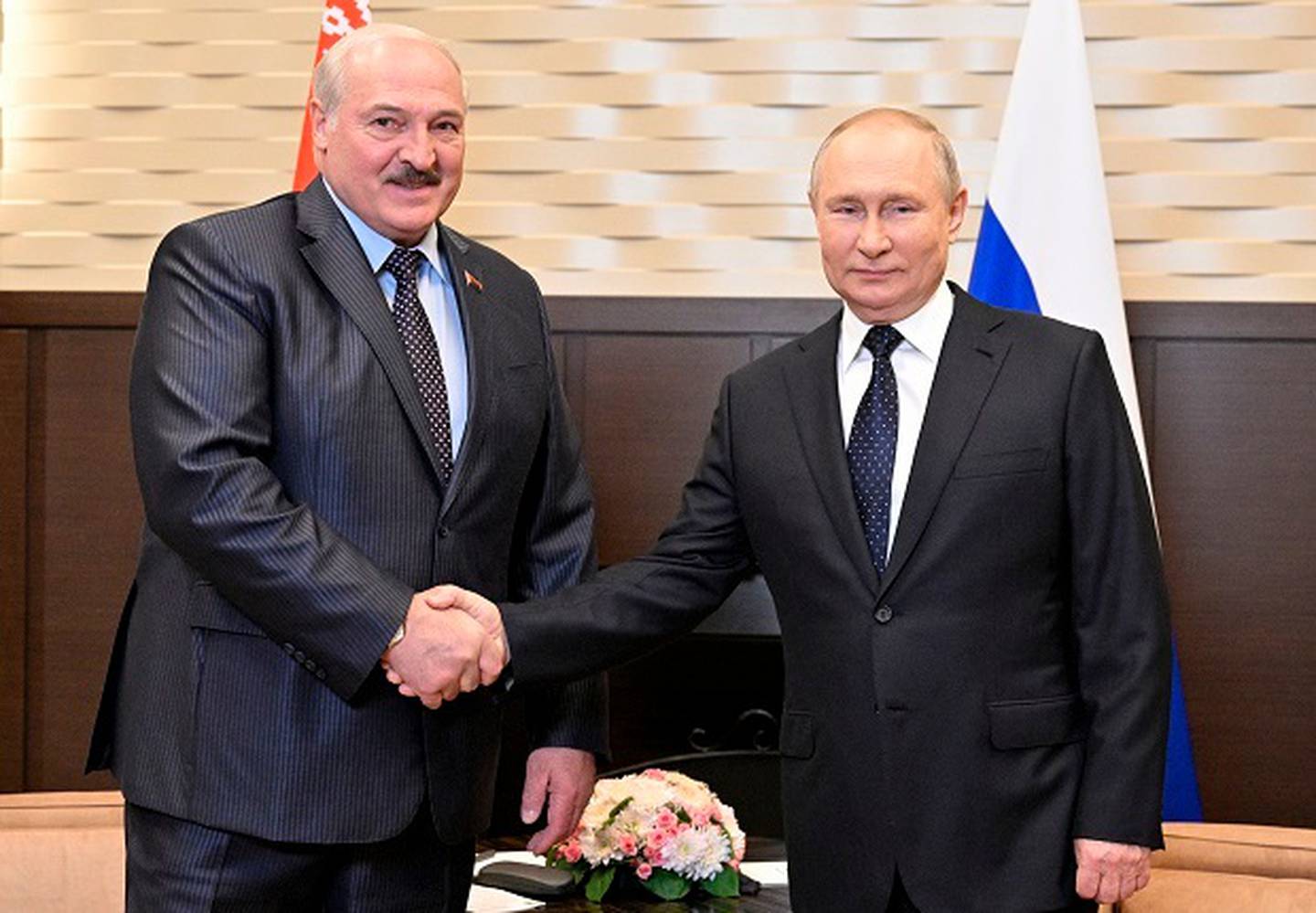 "Our position is that the concerns and interests of any country, be it one-eighth of the land or an island nation, must be heard by all!" he reportedly wrote.

Apparently, this doesn't apply to states Putin wants to secure.

After three months of war in which Russian forces have been repulsed from Ukraine's north, rolled back in the east and stalled in the south – this fresh attempt at international dialogue seems strangely misplaced. Kyiv has halted ceasefire talks with Moscow, insisting it won't surrender any of its sovereign territories.

That leaves Putin – and Lukashenko – in a precarious position.

"Belarus calls on the countries of the world to unite and prevent the regional conflict in Europe from escalating into a full-scale world war," Lukashenko urges in the letter dated May 18.

The US, Nato and a large proportion of the global community are seeking to guarantee Ukraine's sovereign security by providing weapons and training to resist the Russian invasion.

"Together and each in our role, we can do a lot today: refrain from the supply of weapons," his letter reads.

As the Kremlin's closest ally, Belarus has supplied Putin's military access to its airfields, bases, rail and road networks, hospitals and supplies. 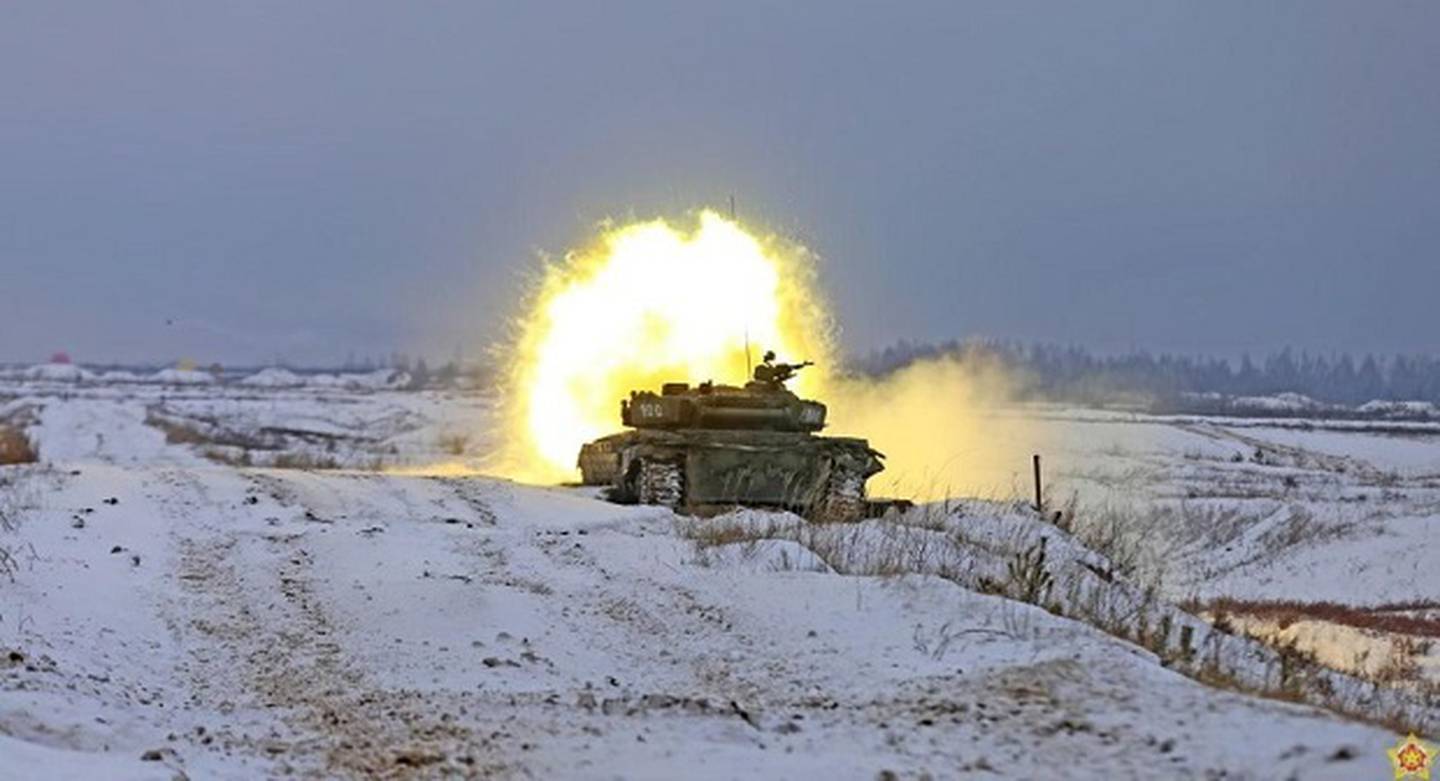 Russian tanks leaving for Russia after joint exercises of the armed forces of Russia and Belarus. Photo / Getty Images

But Lukashenko has been walking a political tightrope since Putin invaded Ukraine in February. He allowed Belarus to become a staging post for Russia's failed attempt to seize the capital of Kyiv. But he has not yet permitted his forces to participate in the "special operation" itself.

"Today, the world, unfortunately, forgets that Belarusians have never been a threat to any of their neighbours," he argues. But he doesn't explain why he allowed Russia's armoured battalions, missile units and combat aircraft to attack Ukraine from his territory. 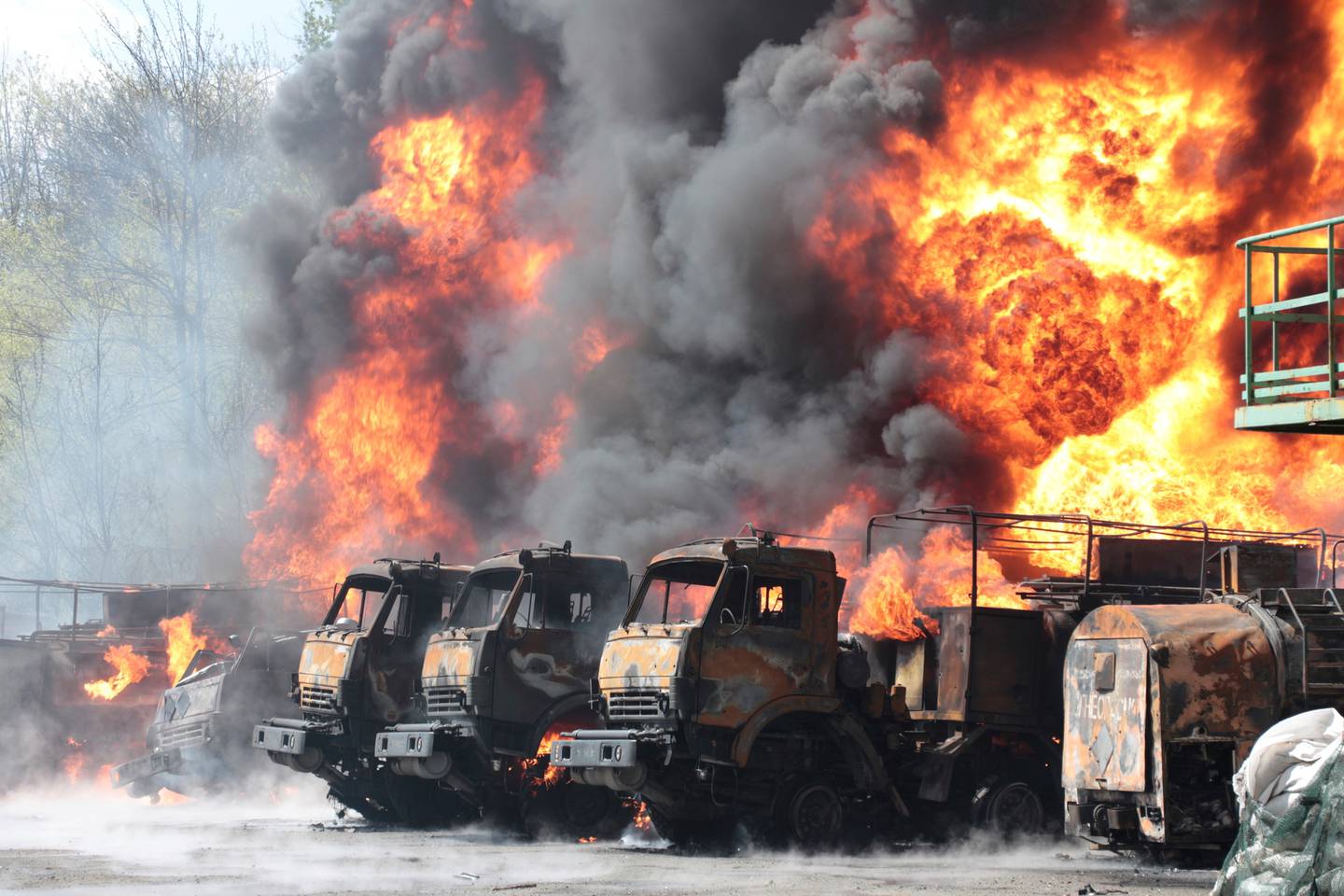 Vehicles are on fire at an oil depot after missiles struck the facility in an area controlled by Russian-backed separatist forces in Makiivka, 151km east of Donetsk, eastern Ukrainee. Photo / AP

"We are not aggressors, as some states try to present us. Belarus has never been the initiator of any wars or conflicts," he added.

"We are not traitors. Honesty and integrity in relationships are important to us."

'It's all your fault'

"The conflict in Ukraine, its root causes, and the current Western sanctions against Russia are already having their devastating consequences," Lukashenko writes.

International sanctions were imposed after Russia's 2014 invasion of Ukraine, when it annexed the Crimean Peninsula.

But Lukashenko blames the US and the European Union for starting the new war. This was because they insisted on ignoring Putin's "security needs", he explained.

"The unwillingness of Western countries to work on strengthening common and indivisible security, their disregard for legitimate interests and ignoring the concerns of other partners, primarily Russia, first resulted in trade, economic and information wars, and then provoked a hot conflict on the territory of Ukraine," Lukashenko said. "The security architecture in Europe has failed."

But Nato did not invade Poland, Latvia, Lithuania, Estonia, Romania – or the host of other ex-Soviet-bloc countries that have joined in recent decades.

All explained their applications to the defensive alliance as a response to Putin's invasions of Georgia and Chechnya, its hostile diplomacy and overt acts of espionage.

In a separate address last night, Lukashenko accused the US and Europe of attempting to "dismember Ukraine".

"What worries us is that they are ready, the Poles and Nato, to come out, to help take western Ukraine like it was before 1939," he said during a televised event with Russian President Vladimir Putin.

Belarus, however, remains the primary beneficiary of the carving up of Poland under a "non-aggression pact" between the Soviet Union and Nazi Germany in 1939. 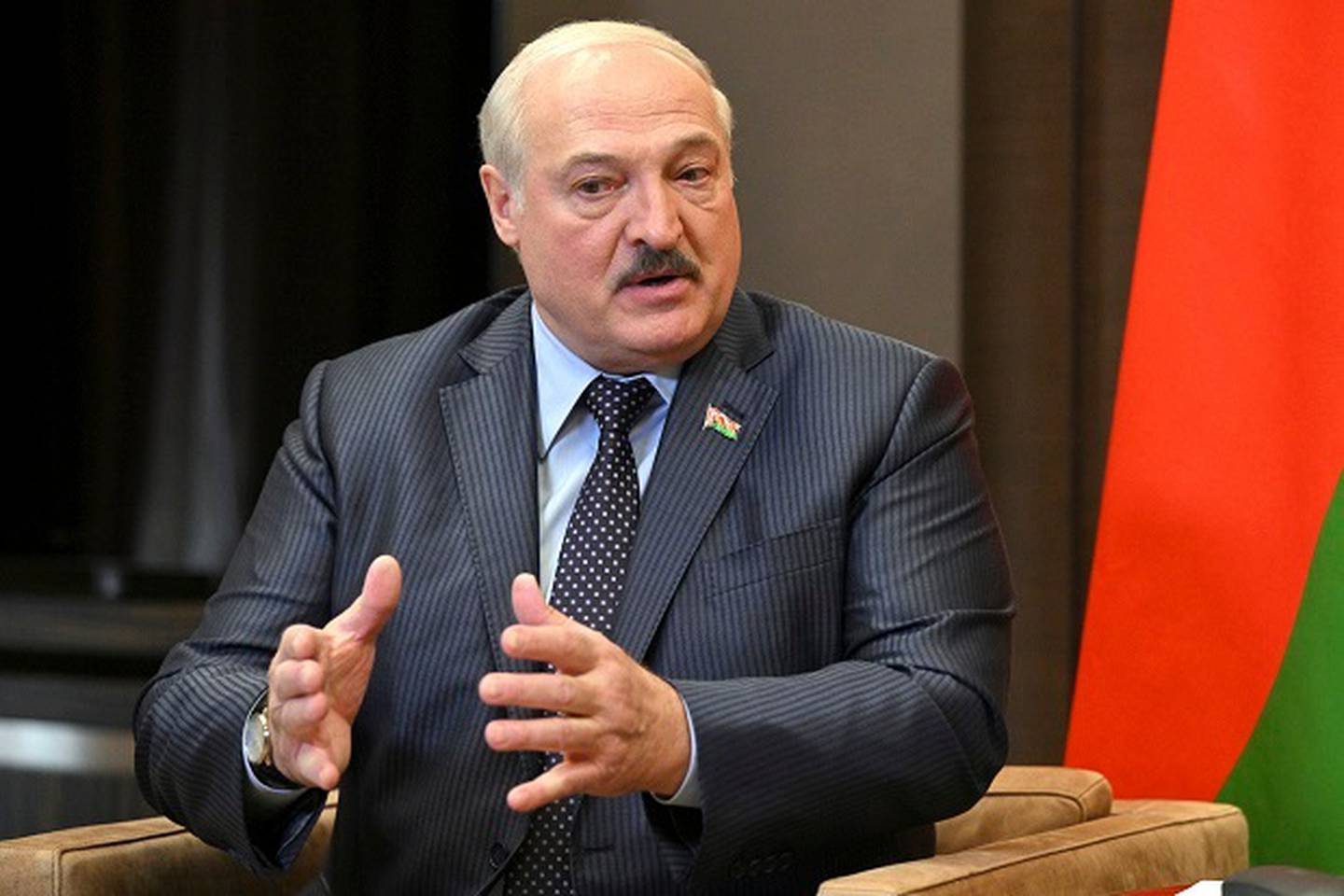 Lukashenko, who owes his survival as Belarus' dictator to Putin, also demanded the world adopt standards that end "information warfare and any provocations, from inflating hate speech in the media, from encouraging racism and discrimination based on national, cultural, linguistic and religious affiliation, from legalisation and direction of mercenaries".

Just not Russia itself, it seems.

Putin has deployed the mercenary Wagner group to Ukraine. It has unleashed a powerful internal and global propaganda campaign seeking to characterise Ukraine's Jewish president as a Nazi. It denies the existence of the Ukrainian culture. Destroyed houses are photographed in Irpin, on the outskirts of Kyiv, Ukraine in April. Photo / AP

But Lukashenko seems particularly bothered at the fallout to his own economy from sanctions against Moscow. He is reportedly also concerned that Belarus may soon be the subject of targeted sanctions for assisting the Russian invasion.

"We must jointly resist restrictive trade measures," his letter instructs the UN.

US Secretary of Defence Lloyd Austin said today that the rationale behind the attempt at justifying the invasion remains unclear.

"Russia's unprovoked and cruel invasion has galvanised countries from around the world, and the bravery, the skill and the grit of the Ukrainian people have inspired people everywhere.

"In terms of what his overall strategy is, that's unknown," he added.

So far, UN Secretary-General Guterres has not responded publicly to the letter.