Now before I start... those that know me, follow this website, know I want a stronger defence force, and I want to raise defence spending.

However I see a lot of people going on about Singapore and it goes something like this;

Singapore has a similar population to New Zealand and they have a better defence force.

Meaning even if both counties were spending 2% of GDP, Singapore would still have more money and their dollar would be able to buy more.

NZ had to pay 1.4 Billion for the P8's and infrastructure Singapore to do exactly the same are only paying a billion... saving 400 million dollars. Spending that 400M on other equipment that NZ can not buy, and that is just with the exchange rate.

The 2% of GPD is BS... In my humble opinion. As there is more to it than just a percentage. The buying power of said currency, the actual level of GDP. Now add in where equipment is being bought, and from where. China, Russia? or the US maybe Europe or locally build? Are you an island nation needing expensive naval vessels or are you a landlocked country that does not need a navy and spend more on army and airforce. Size and population to GDP and buying power of said dollar as well as requirements of the actual country all need to be taken in to consideration.

It also depends what is counted in the defence budget and how said country calculates it's budget, some countries example, count the buying of all the equipment as part of the budget, some countries it is only the operational budget. Other countries it is a hybrid... all the big equipment being bought is not part of the Defence budget but some of the smaller items are... New Zealand's 20 billion dollars over 15 years for example, is not part of the defence budget, it is separate fund, yet it is replacing a lot of equipment, from the P3K2's to the P-8A's, the C-130(H)'s to the C-130J-30 Super Hercules, it replacing the armored Pinzgauer to the Bushmasters, it will also replace the general purpose Pinzguar soon. It will replace SeaSprites, the 2 OPV's as well as getting 2 enhanced sealift vessels (LPD's), It got the new AOR tanker HMNZS Aotearoa, the DHV HMNZS Manawanui, and will also get a new SOPV.  It will upgrade the NZLAV III's. But that is not part of the defence budget.

Other things to consider is the country's Defence Industry itself, example; Singapore has its own ship building and defence industry. It becomes in the best interest of the government to use this, as that money goes back in to the community and can grow the overall GDP.

Another thing to consider is pay rates of the personal. What do they pay a Filipino soldier compared to the New Zealand soldier as an example? When you look at New Zealand, pay takes up nearly a quarter of the budget. Now we have to clothe them, feed them, continuously train them, and equip them... and all that come out of the budget and with the same issues as above.

How many operations are they on over the said year? How many exercises does the country hold per year, and many deployments do they get deployed on? At the time of writing this article the RNZAF has 2 P-3K2's deployed, HMNZS Canterbury about to be deployed, The RNZAF have also done a couple of runs to Antarctica and that is just in the past month...

Now add in the actual level of maintenance that is regularly carried out, as well as operational costs of said ship, vehicle, aircraft etc. The NH-90 is expensive per hour flying compared to the SeaSprite and probably helo's from Russia or China.

New Zealand regularly deploys, its defence force on UN missions, whether they are anti pirate, peace keeping, helping our Australian brothers in arms fighting fires, HADR, SAR, maritime patrols, Antarctica support and supply, example; currently the Air Force is on it's third UN mission in the sanctions against North Korea.

Does the Philippines have an actual separate coast guard on a separate budget, to take up some of these operations and patrols? In the Philippines case, they do and they get an extra 1/2 billion dollars to carry out their operations, the maritime boarder patrols that come out of our Navy and airforce budget. This budget is just an operating budget it doesn't buy the equipment either, they are separate investment made by the government. Another words this budget is only an operating coast or running cost.

New Zealand regularly holds exercises, from the international bi-annual Southern Katipo exercise, to various other minor exercises like Joint Waka, Exercise Steel Talon, Sari Bair and regularly attends, the US lead Pacific Partnership, the FPDA Exercise Bersama Lima, the USN exercise RimPac, The Australian exercise Talisman Sabre, The French exercise CROIX DU SUD and many others, and these deployments all come out of the operational section of the defence budget.

Some things are just more expensive in New Zealand, and that is being a remote set of islands in the South Pacific, and lot of things have to be imported increasing the costs, and unfortunately there is not a lot we can do with that. It is what it is.

All this has to come out of the defence budget. So it is not just about buying equipment. There many other expenditures to think about and are involved and other considerations that have to put into the calculation when you start to compare to other nations and the Defence Force and their budget.

On a final note you have to look at where the country is in the world, what are their security needs, and the country's actual defence policy overall and you will find they will be totally different affecting budget and procurements.

Now again I am all for us having a stronger defence force, and do want the NZG to up our game. But it is not just about spending money on equipment there are other things to consider. New Zealand is currently spending an extra $20 Billion over 15 years just on equipment modernisation. That is an extra 1.34 billion dollars a year over and above the standard defence budget.

Another thing or another way to look at it is budget per capita... 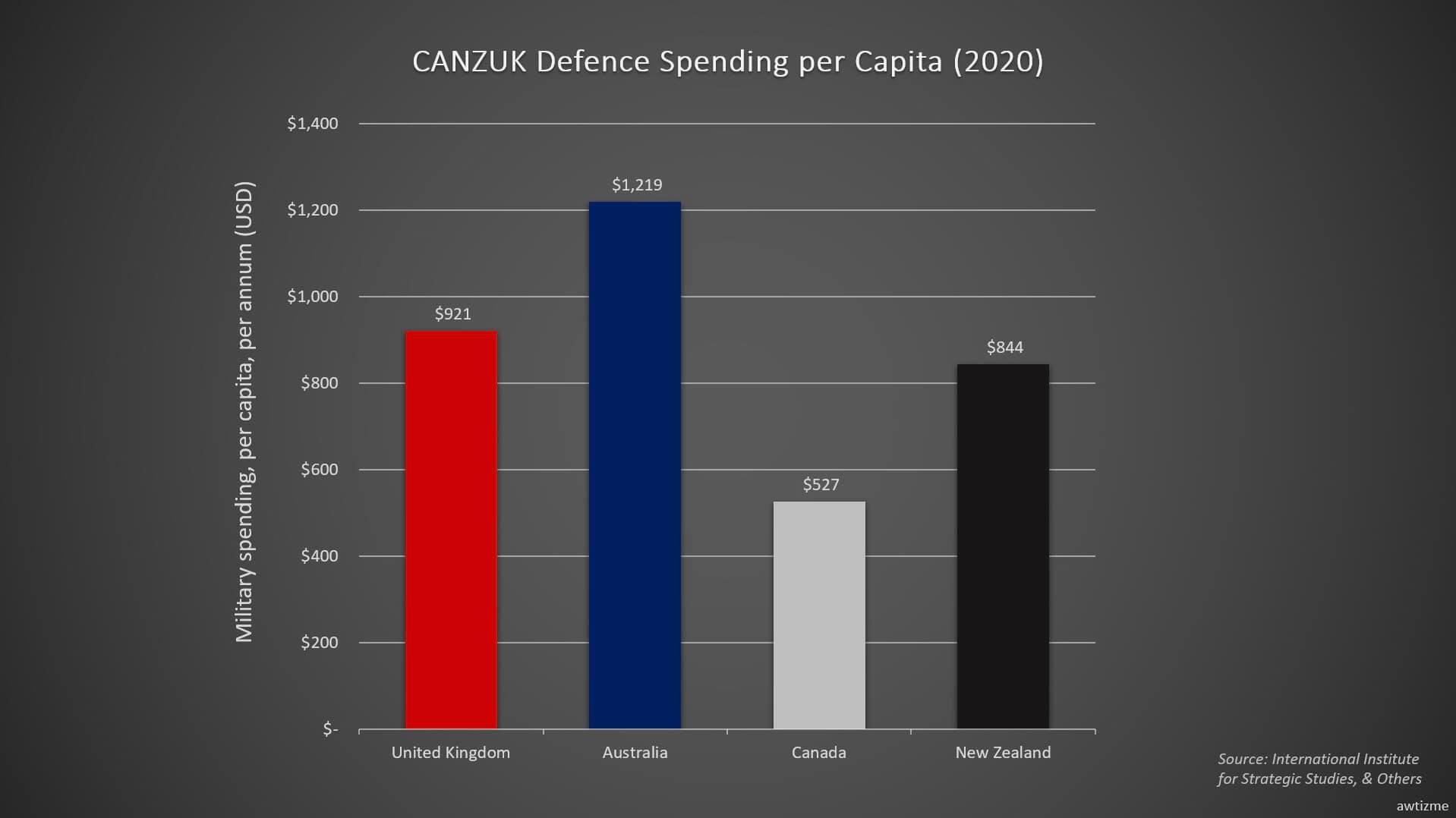 When you see this graph, per capita or per person, New Zealander's pay more than Canada and nearly on par with the UK.