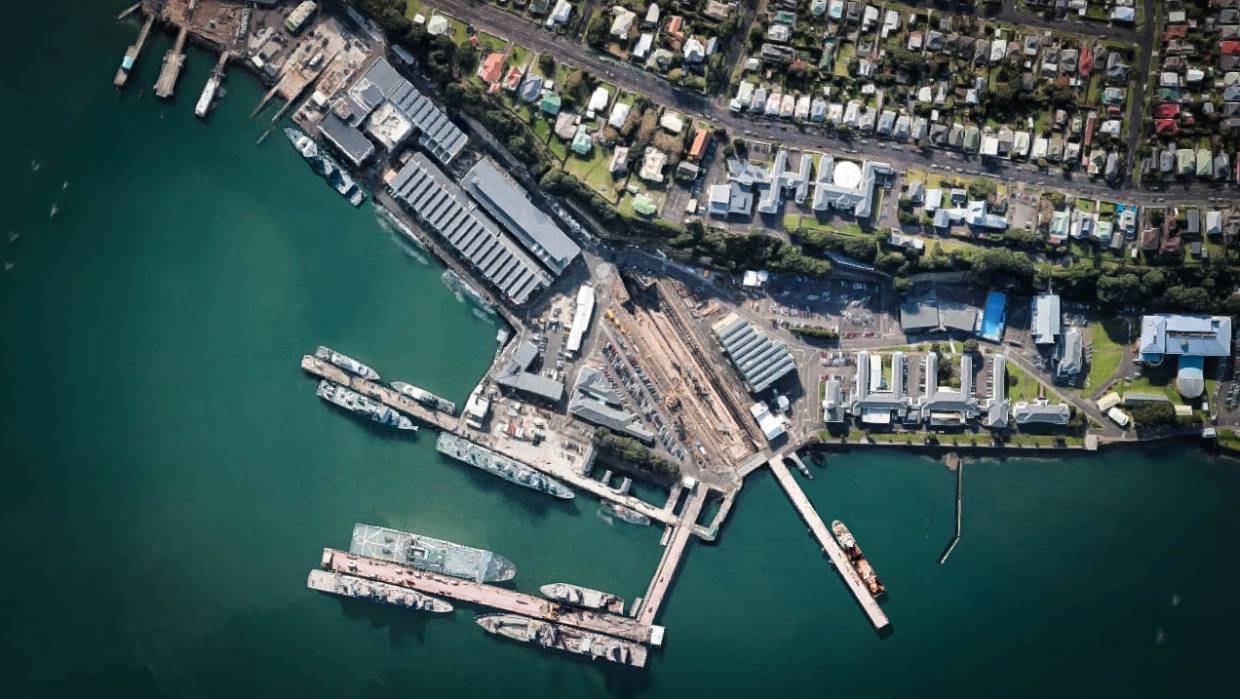 A firefighting chemical banned from manufacture has been repeatedly leaked from Devonport Naval Base.

The eight leaks of halon – described as a powerful global warming agent – were among nearly 150 hazardous chemical spills investigated at the Auckland base in the past decade.

They included a 500l spill from a wastewater tank and an 800m slick of firefighting foam in the ocean after it washed off the deck of a ship.

Also investigated was a caustic soda mishap after a beer keg line burst during cleaning, according to a document obtained under the Official Information Act.

The 'halon' leaked at Devonport was one of a group of substances known as halons, which occupy a legal twilight zone in New Zealand.

It is prohibited under law because of its huge potential for depleting the ozone layer.

But halon remains mandatory in some aircraft firefighting systems because it is very lightweight and effective, though work is underway to fully phase it out.

A Defence Force spokeswoman said recycled halon is used as a firefighting medium aboard the two ANZAC Class frigates.

Manufacturing any new halon was banned by international treaty, so stocks are slowly depleting.

An Environmental Protection Agency (EPA) spokesman said halon can only be imported by applying for special 12-month exemption permits. 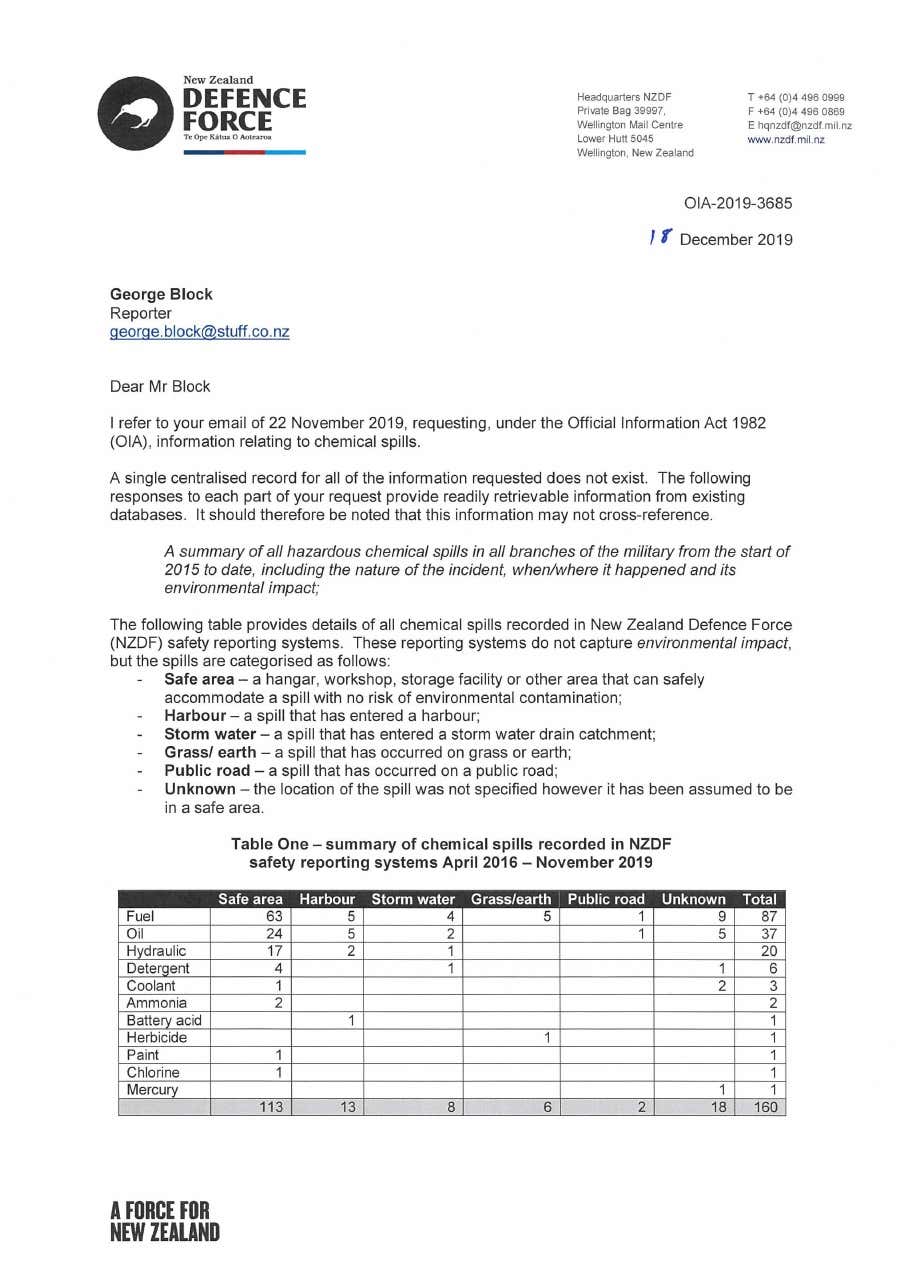 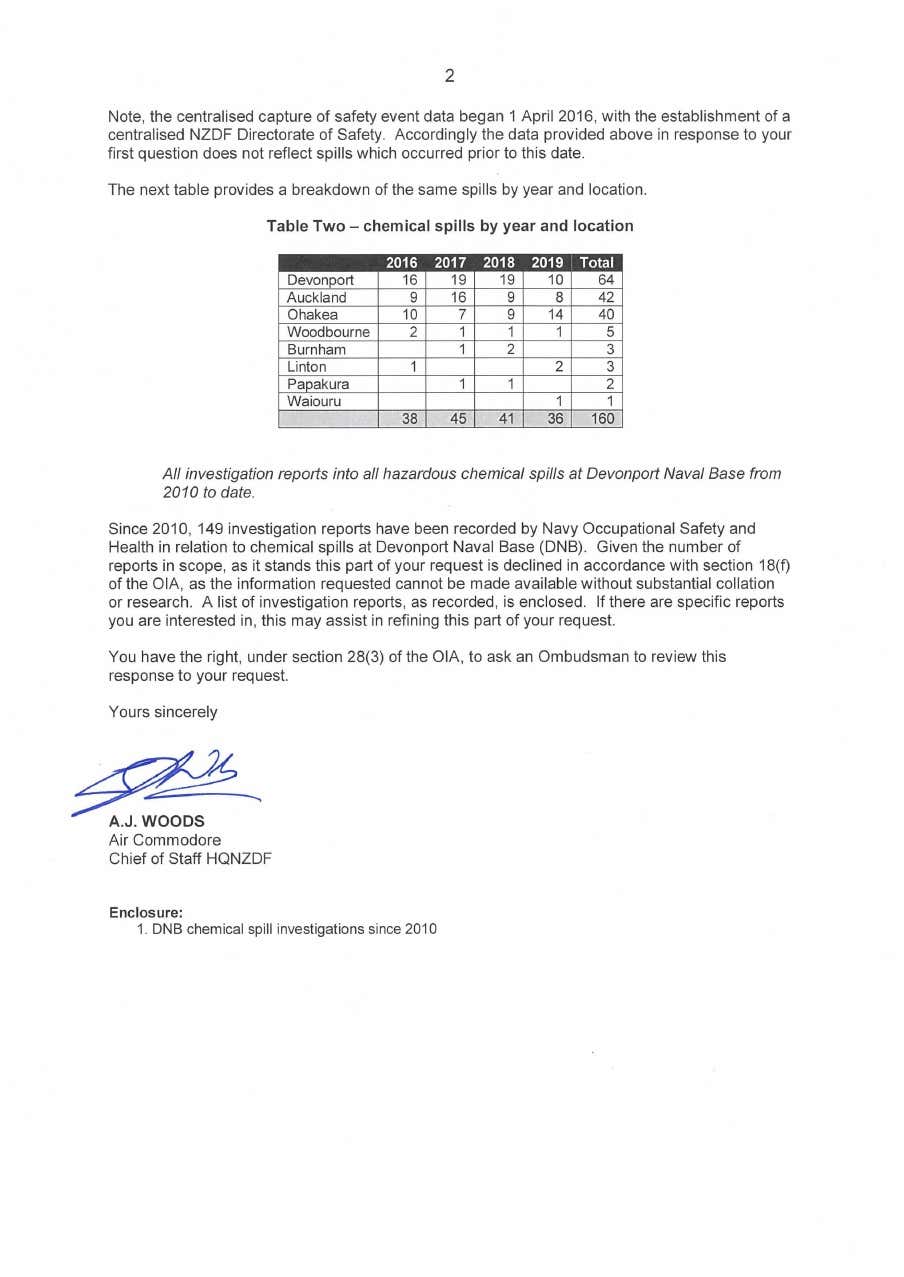 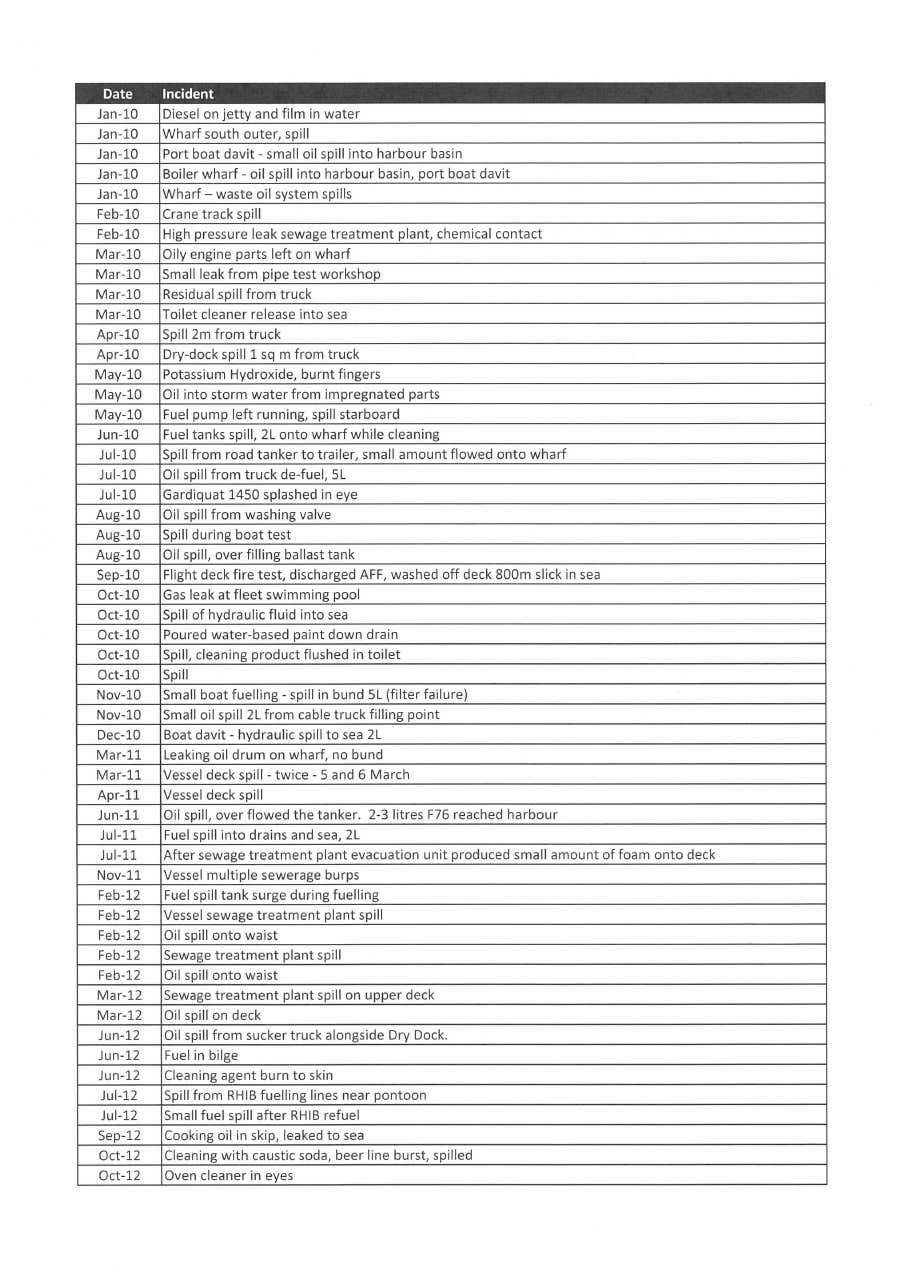 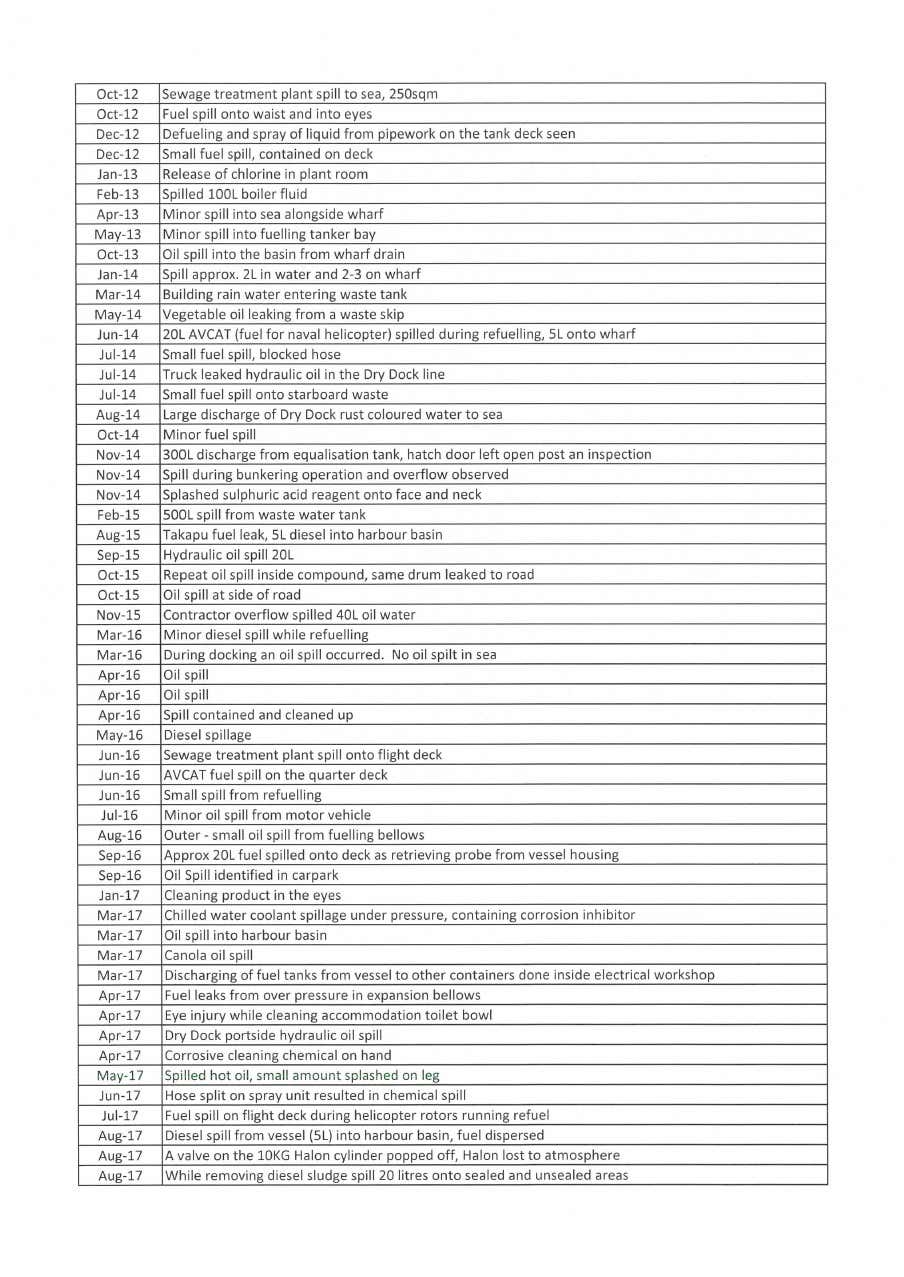 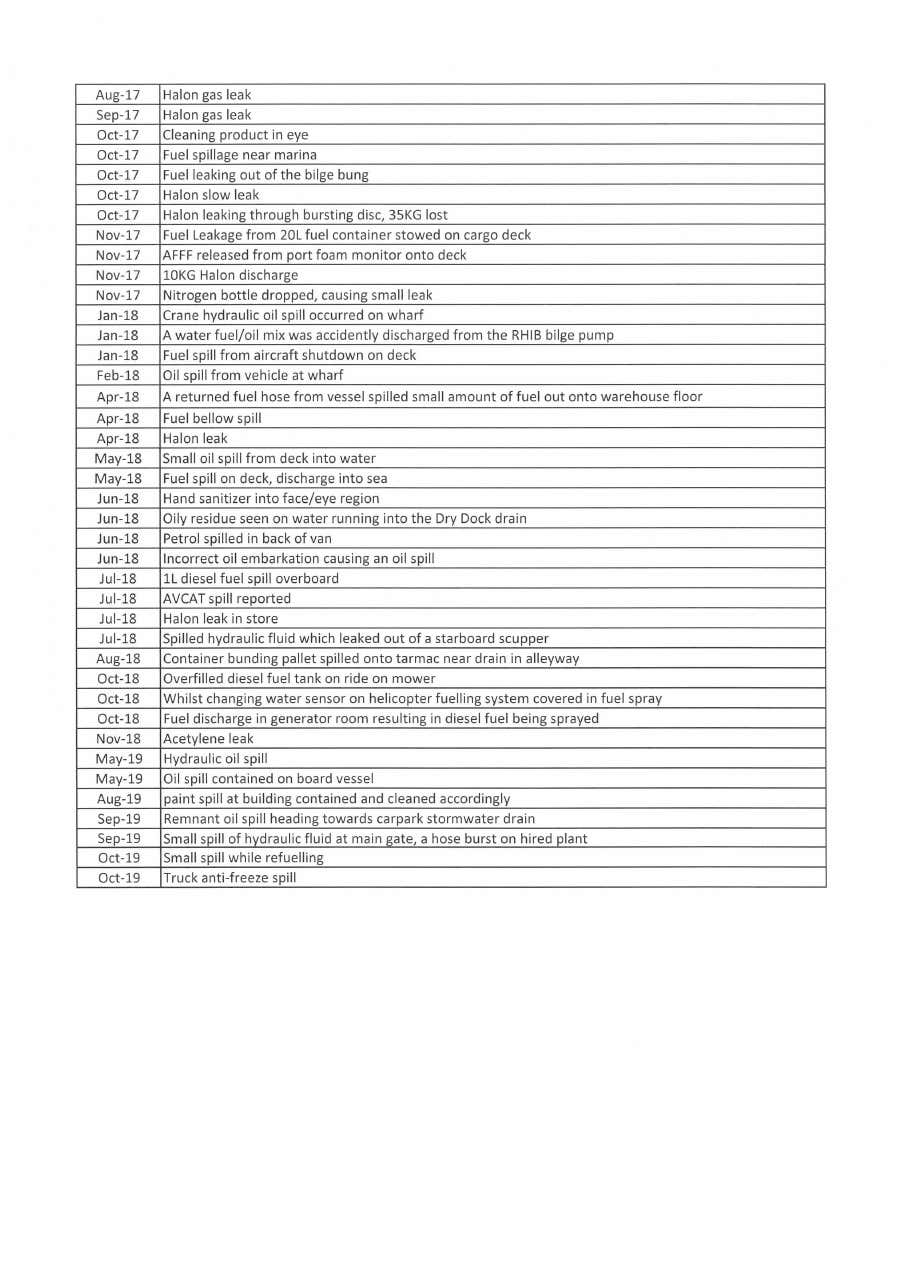 They included an incident where a valve on a 10kg cylinder popped off and the halon inside was lost to the atmosphere.

In another instance, 35kg leaked through a bursting disc on its container.

The leaks came as news to the EPA.

A spokesman said the agency was not notified of them because it was not a legal requirement under the Ozone Layer Protection Act (OPLA) at the time.

However, it recently introduced a notification requirement when issuing halon exemption permits, the spokesman said.

"The leaks that you refer to occurred before the introduction of this requirement by the EPA."

A LITANY OF LEAKS

The Official Information Act response from Defence Force headquarters chief of staff Air Commodore A.J. Woods revealed 149 chemical spills were investigated at Devonport Naval Base in the past decade.

Among them was a 2010 incident where firefighting foam washed off the deck of a ship and resulted in an 800m slick in the sea.

The outcome of that investigation, as with the others, remains unknown, as Defence refused to release the 149 investigation reports by Navy Occupational Safety and Health, citing the substantial collation and research required.

In October 2012, a "sewage treatment plant spill" resulted in a 250sqm slick at sea.

A Defence spokeswoman said the material was a bilge diesel mixture and the spill was reported to Auckland Harbourmaster.

In another incident subject to an investigation, 500l was spilled from a wastewater tank at the base in February 2015

All spills into the sea spurred a notification to the Harbourmaster or Maritime NZ, the spokeswoman said.

In 2018, Stuff reported toxic firefighting foam, used in training, had contaminated the ground and the shoreline near the Devonport base.