What is it about missiles?

How important are missiles in are modern warfare?  Are they the main weapon a vessel needs to have? Are there other weapons that a say a frigate requires? These are important questions.

The short answer is simple yes. Missiles are a weapon a modern frigate should have both Anti-Air and Anti Ship. But the more important question is, is the missile the only weapon the vessel should have. The answer to this question is a most definitely no.

First let's look at the missiles, as stated there are three main types of missiles. We have the anti-air missile AAM designed to engage incoming air threats from incoming missiles to enemy aircraft. We then have missiles that are designed to hit and damage other ships or a anti ship missile ASM. The third is classed as a cruise missile designed to be launched from the air/sea or land and target land based targets.

The CAMM (Common Anti-Air Modular Missile) series is a family of surface-to-air missiles developed by MBDA for the United Kingdom. CAMM shares some common features and components with the ASRAAM air-to-air missile, but with updated electronics and an active radar homing seeker. The Common Anti-Air Modular Missile is replacing the Sea Wolf missile on Type 23 frigates of the Royal Navy since 2018, will replace the Rapier missile in British Army service and is contributing to the updating of MBDA's ASRAAM in service with the Royal Air Force. Also known as Sea Ceptor. CAMM has a minimum operational range of less than 1 km and a range greater than 25 km, although IHS Jane's reports that trials have a shown a capability of up to 60 km. CAMM weights 99 kilograms (218 lb), is 3.2 m (10 ft 6 in) in length, 166 millimetres (6.5 in) diameter and reaches generous supersonic speeds of Mach 3 (or 1,020 meters per second).

CAMM is a point defence and local area defence missile designed to respond to sophisticated missile attacks and has the capability to defend against saturation attacks of supersonic anti-ship cruise missiles, aircraft and other high-performance targets. It does this via multiple channels of fire, providing 360-degree simultaneous coverage and high degrees of manoeuvrability. MBDA state that CAMM has a "high rate of fire against multiple simultaneous targets", providing capabilities comparable to the Aster 15 missile. 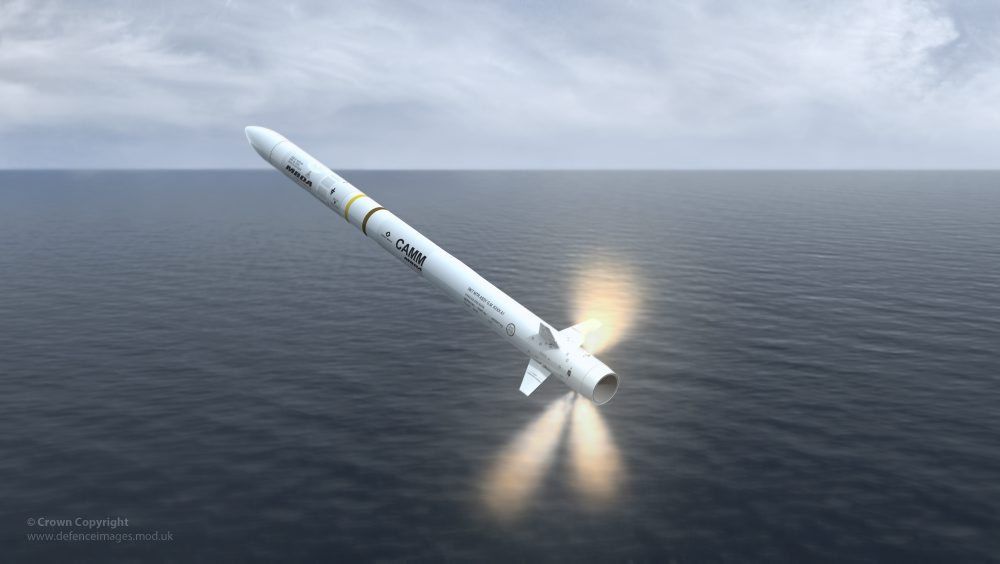 MBDA claim that CAMM has a "wide target set", including the capability to engage small naval vessels, which would give the missile a limited surface-to-surface role.

Design characteristics allow for low cost by modularity and minimising electromechanical complexity through implementing most functionality in software. Additionally, the command and control software reuses over 75% of that developed for the PAAMS system. 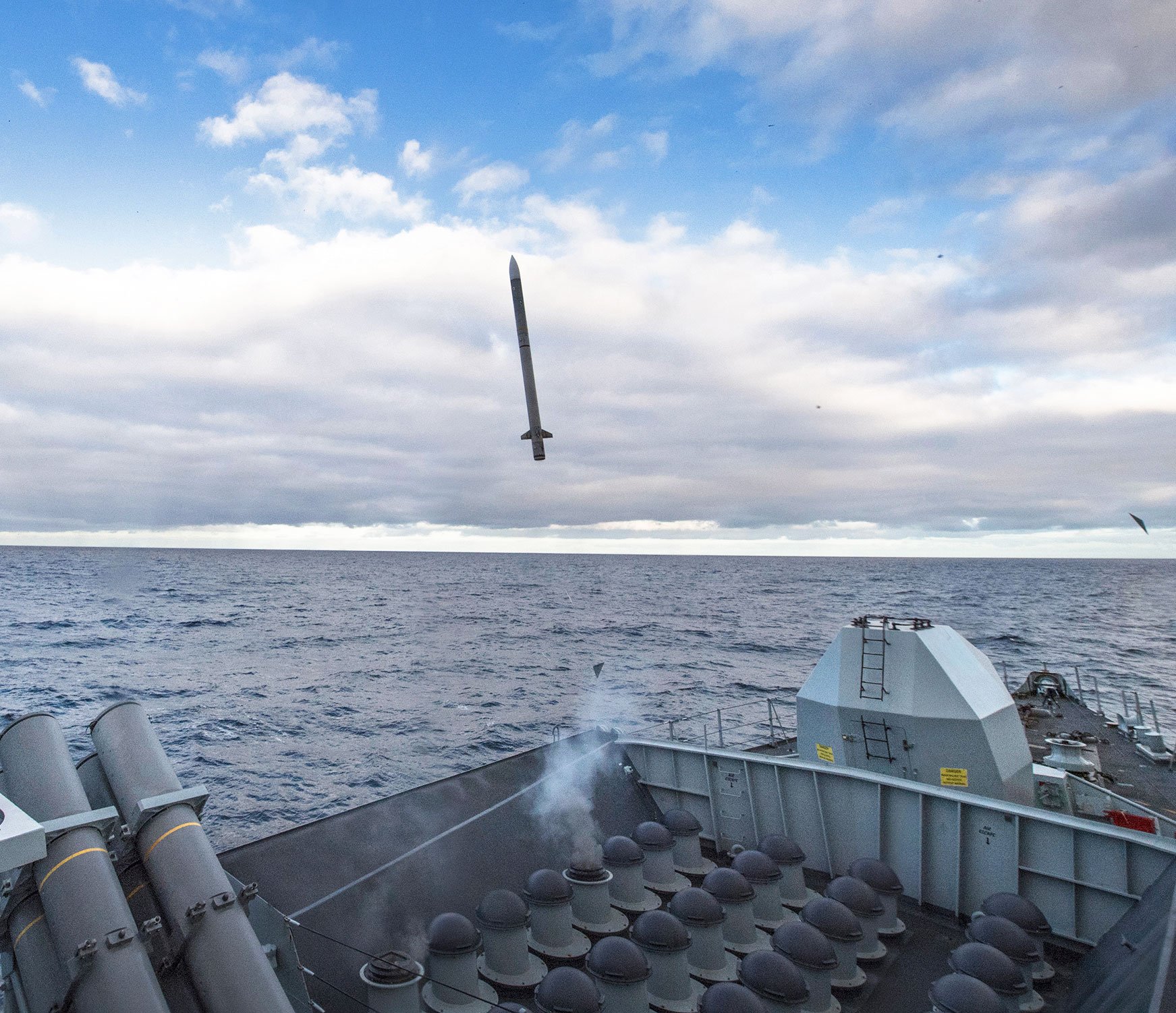 CAMM's Extended Range application is known as CAMM-ER and has been under development with MBDA for the Italian MoD since 2013. The CAMM-ER (extended range variant) shares the same characteristics of the original CAMM with the exception of an additional rocket booster which significantly increases the missile's engagement range, out to 45 km and a slightly adapted missile structure. The missile is 160 kilograms (350 lb) in weight, 4.2 metres (14 ft) in length, 190 millimetres (7.5 in) diameter.

The RIM-162 Evolved SeaSparrow Missile (ESSM) is a development of the RIM-7 Sea Sparrow missile used to protect ships from attacking missiles and aircraft. ESSM is a larger missile than CAMM or Sea Cepto which in turn means it has a greater range.

The original Sea Sparrow was an expedient design intended to provide short-range defensive fire in a system that could be deployed as rapidly as possible. In the years after its introduction, it was upgraded to follow improvements being made in the air-to-air models used by the US Navy and US Air Force. The ultimate version in this line of weapons was the R model, which introduced a new dual-seeker homing system and many other upgrades. However, the AIM-120 AMRAAM offered higher performance from a missile that was smaller and lighter, and development of the Sparrow ended in the 1990s. This left only the Sea Sparrow using the basic platform, and it no longer had to fit on aircraft. So instead of simply using the P and R models as they were, it was decided to dramatically upgrade the weapon. The ESSM emerged as a completely new weapon, common only in name with the original, although using all of the same support equipment allowing it to be fit to ships already mounting the older models. Compared to the Sea Sparrow, ESSM has a larger, more powerful rocket motor for increased range and agility, as well as upgraded aerodynamics using strakes and skid-to-turn. In addition, ESSM takes advantage of the latest missile guidance technology, with different versions for Aegis/AN/SPY-1, Sewaco/Active Phased Array Radar (APAR), and traditional target illumination all-the-way.

In the 2000s the NATO Seasparrow Project Office began planning an upgraded Block 2 version of the ESSM. In 2014 Canada pledged 200M CAD to underwrite their share of the Block 2's development cost. ESSM Block 2 leverages the existing Block 1 rocket motor and features a dual-mode X band seeker, increased maneuverability, and other enhancements. Block 2 features enhanced communications systems that allow for mid-course guidance correction, which makes the missiles easily networked into the Navy's emerging Cooperative Engagement Capability. Unlike Block 1, Block 2's active radar homing seeker will support terminal engagement without the launch ship's target illumination radars. The improved ESSM Block II will be fielded by the US Navy from 2020.

On 14 May 2013, the ESSM intercepted a high-diving supersonic test target, demonstrating the ability to hit high-G maneuvering, low-velocity air threats, as well as surface targets.

On 9 October 2016, USS Mason fired one RIM-162 ESSM and two SM-2s to defend against two incoming Houthi anti-ship cruise missiles, potentially Chinese-built C-802 missiles. It is unknown if the RIM-162 was responsible for intercepting either of the missiles, but the incident marked the first time the ESSM was used in a combat situation.

These are the main two missile systems in our area of influence of the south pacific, there are other systems ie Aster family of missiles but CAMM or Sea Ceptor on the upgraded New Zealand ANZAC frigates and ESSM on the upgraded Australian ANZAC frigates. So which one is better. There is absolutely no simple answer for this, some say CAMM is more accurate than ESSM, but there is absolutely no proof of this and is only hear say. Both missiles we have to say that the actual range of them is classified. Especially with reports saying CAMM could reach out to 60km. But the reality is this may be in ideal conditions with a static target. As soon as a target is trying to dodge the missile and the missile altering its course to intercept the actual range is degraded. But on the official information released ESSM has the better range and is a slightly faster missile.

While range here is semi important, the most important thing is actually the ability to detect any incoming threat, from sea skimming missiles and or aircraft, and that is where a mix of technology's of radars, phased arrays radars, ESM's and Datalinks come into play. One vessel detects a threat, sending the data to another to engage a target with multiple sources of data coming in to have the target. The idea of having multi systems with different capabilities help to cover all angles and options.

The regular Harpoon uses active radar homing and flies just above the water to evade defenses. The missile can be launched from:

The Royal Australian Air Force can fire AGM-84-series missiles from its F/A-18F Super Hornets, F/A-18A/B Hornets, and AP-3C Orion aircraft, and previously from the now retired F-111C/Gs. The Royal Australian Navy deploys the Harpoon on major surface combatants and in the Collins-class submarines. The Spanish Air Force and the Chilean Navy are also AGM-84D customers, and they deploy the missiles on surface ships, and F/A-18s, F-16s, and P-3 Orion aircraft. The British Royal Navy deploys the Harpoon on several types of surface ships.

The Royal Canadian Navy carries Harpoon missiles on its Halifax-class frigates. The Royal New Zealand Air Force is looking at adding the capability of carrying a stand-off missile, probably Harpoon or AGM-65 Maverick, on its six P-3 Orion patrol planes once they have all been upgraded to P3K2 standard, there is also the possible addition of the harpoon the or penguin missile to the P-8A Poseidon.

Penguin was originally developed in a collaboration between the Norwegian Defence Research Establishment (NDRE; Norw. FFI) and Kongsberg Våpenfabrikk starting in the early 1960s, with financial support from the U.S. and West Germany. US Navy test facilities and technical assistance were made available to facilitate development. It was the first NATO AShM with an IR seeker (instead of the commonly used active radar technology) and both hardware and software has been updated since entering series production in 1972.

Fire-control was provided by a Kongsberg SM-3 computer which could cue the missiles based on either active radar or passive ESM data.

The Penguin can be fired singly or in coordinated-arrival salvoes. Once launched the launching craft is free to turn-away as the missile is inertially guided until the autonomous terminal homing phase. Propelled by a solid rocket engine, latest variants of Penguin can perform random weaving manoeuvres at target approach and strike the target close to the waterline.

Of NATO's inventory of such missiles, it is the only variant that performs a terminal bunt and weave manoeuvre (although the US Harpoon missile retains its ability to execute a terminal bunt). The 120 kg warhead (originally based on that of the AGM-12 Bullpup, built under license by Kongsberg) detonates inside the target ship by using a delay fuze. The MK3 when launched from high altitudes can initially act as a glide bomb, only firing its rocket engine to extend range, or ideally to achieve maximum speed before hitting the target; for better penetration.

In its various versions, the Penguin can be launched from a number of different weapons platforms:

Again the two missiles used in the south pacific harpoon on the Australian ANZACs, and the Penguin on the New Zealand SH-2G(I) Super Sea Sprites. This one compared to the CAMM vs ESSM debate is easier to answer, The Harpoon has the much greater range and larger warhead. Being able to take out a target 150 nmi or  280 km compared to the Penguin range of 35km. However the Penguin has an upgraded bigger brother the Naval Strike Missile (NSM) an anti-ship and land-attack missile that has a much similar capability to the aging Harpoon ASM. Harpoon also has a much wider user base meaning maintenance and even restocking the missile after firing your compliment of missiles. 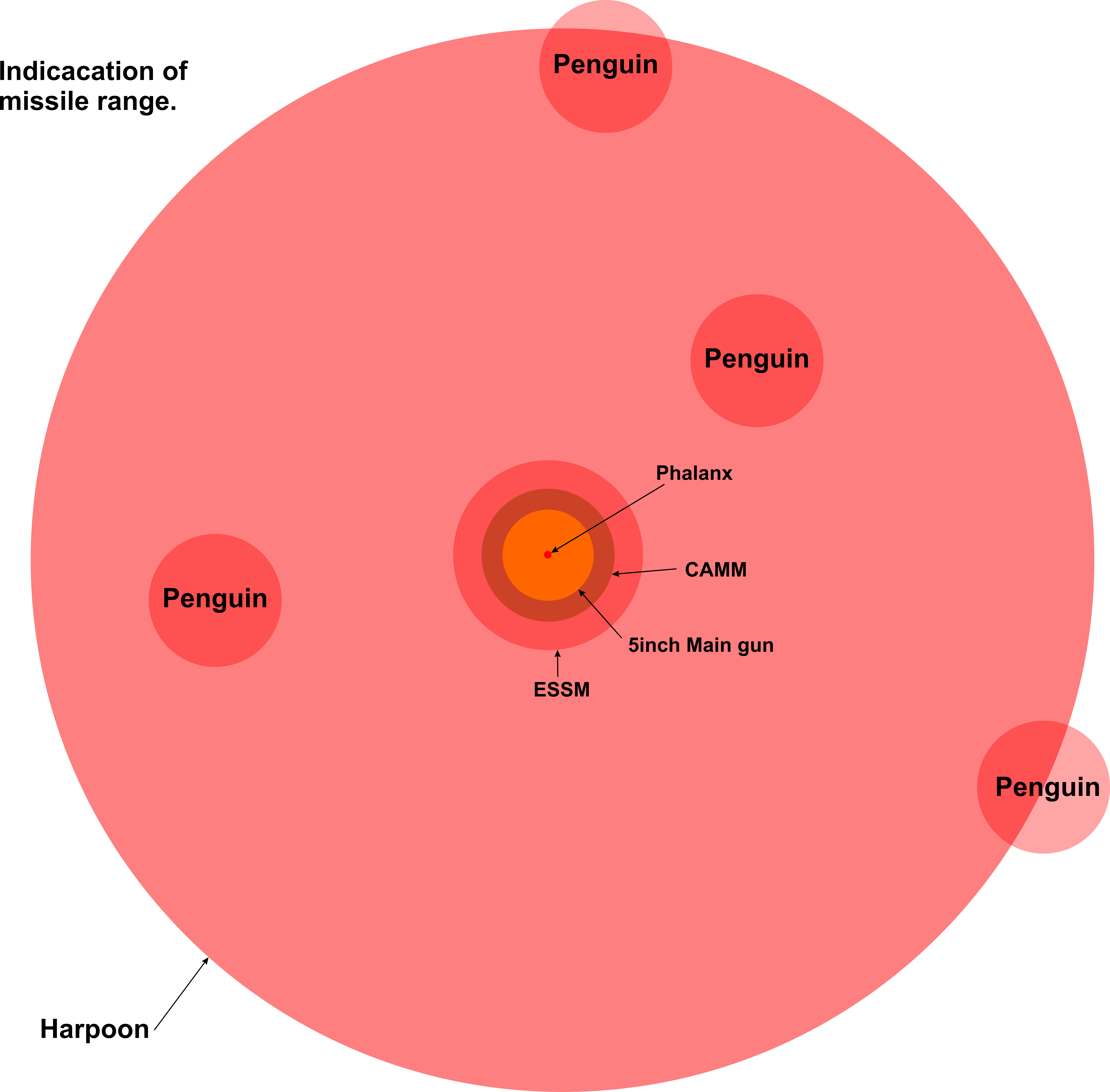 In a naval battle the penguin missile is mobile meaning that it is launched from the helo increasing its range and receiving the data from the ship can fly to a different angle of attack. But I must stress here that the Harpoon still has a great range due to long range anti-air missiles targeting the helo if found or discovered before missile is loose. And as sad as it sounds I would prefer to loose a helo and 3 lives rather than a frigate and 180 lives. But coming in on a different angle may help the the frigate it came from to hide and confuse where it actually is but only if it has not been detected by the enemy. It is a game of hide and seek. Like above the better weapons maybe but you still need to detect, track and identify first.

My over all conclusion here is missiles are very important in modern warfare, but and there is always a but, they are not the only weapon not the only thing to consider. Detection is more important, if you can not detect the target before they detect you, you can't shoot at it, nor do you know it is actually there to shoot at until you are defending yourself from incoming missiles.