Why it's not awkward to be left out of AUKUS

Category : News
Author: From The Detail

But make no mistake, the decision of Australia, the USA, and the UK to tighten their security alliance - and provide Australia with the technology to build nuclear-powered submarines - is laden with potential repercussions in the Indo-Pacific region.

The move has infuriated France, with the AUKUS arrangement supplanting a previous deal worth nearly $100 billion for France to supply Australia with diesel-powered submarines, leading the European nation to recall its ambassadors from Australia and the USA.

But what will AUKUS mean for New Zealand? Is this a sign of our traditional allies pulling away and closing ranks?

And with most commentators agreeing this arrangement was made with China's growing influence in the Indo-Pacific firmly in mind, is there a possibility - as some media have suggested - that these tensions could escalate to full-blown military conflict?

On today's episode of The Detail, Otago University's international relations professor Robert Patman assesses the implications of the AUKUS deal on New Zealand's place in the region - and whether our non-participation could indeed be a blessing in disguise.

"I think it would've caused a domestic political crisis in this country," Patman says of New Zealand's exclusion from AUKUS.

"It would be very difficult to be part of an arrangement where one of its first initiatives is to give Australian submarines the capability to be nuclear-powered."

The move to consolidate and strengthen security ties between the Western triumvirate has, predictably, been met with outrage in China - causing some to question whether tensions could escalate into actual military conflict. 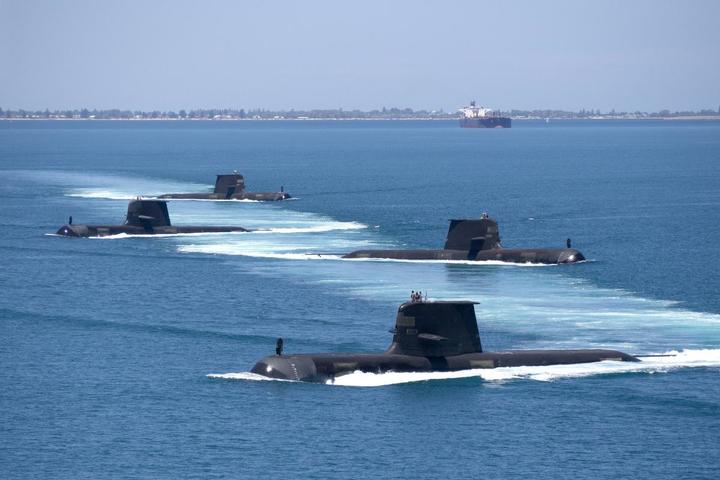 The Australian Collins-class submarines will be replaced by nuclear-powered subs with technology provided by the US under AUKUS Photo: Australian Defence Force/ Lieutenant Chris Prescott

Patman says while this is a possibility it would be surprising, as war is not in the interests of either nation.

China, in particular, has a vested interest in maintaining economic growth - which would be jeopardised by military conflict.

"In China, there is an informal contract between the Chinese government, which monopolises political power, and the Chinese people, 1.5 billion of them.

"In return for monopolising political power, the Chinese government must deliver economic growth - and it has, very successfully.

"But if there is a conflict and China is unable to participate in the global economy, that puts all that at risk. And people in China may question the logic of supporting a one-party state, if that state cannot deliver increased standards of living."

So what do all these moves mean for Aotearoa? We have a lot of skin in this game, yet we stand on the periphery, without any direct influence over proceedings.

Patman says this could work to our advantage, as New Zealand's conduct during two recent crises - the March 15 terror attacks and the COVID pandemic - has boosted our reputation overseas.

He says the view that the world is a binary place, where middle powers hitch their wagons to either China or the US, is anachronistic, and doesn't reflect the modern reality of geopolitics: that small and middle powers, through their actions, can lead the world in showing how to respond to issues that don't respect borders, like international terrorism and climate change.

Showing through our actions that New Zealand isn't a lapdog to either China or the US can only work in our favour in the eyes of the world, Patman says.