Australia and New Zealand on Monday expressed grave concerns over developments in Hong Kong and the human rights situation in the Xinjiang region of China, as the two nations sought to get in lockstep over their biggest trading partner.

In the first face-to-face meeting between heads of both countries in over 15 months, Australia and New Zealand presented a united front on China.

Talks were focused among other things on China, with Australia currently at loggerheads with Beijing, while New Zealand has strengthened economic ties and upgraded a free trade agreement this year with China.

"I think as great partners, friends, allies and indeed family, there will be those far from here who would seek to divide us and they will not succeed,"

New Zealand's approach to China has lead to suggestions by political commentators and the media that Wellington may not be taking a strong enough stance on China's human rights' issues.

Ardern rejected this, saying New Zealand and Australia had similar positions on issues such as trade and human rights.

"You'll see Australia and New Zealand have broadly been positioned in exactly the same place on these issues consistently so I really push back on any suggestion that we are not taking a strong stance on these incredibly important issues," she said in a joint press conference.

Morrison backed Ardern, saying Australia and New Zealand were trading nations, but neither would ever trade away its sovereignty.

"I think as great partners, friends, allies and indeed family, there will be those far from here who would seek to divide us and they will not succeed," he said.

In a joint statement both prime ministers expressed grave concerns over developments in Hong Kong and the human rights situation in the Xinjiang region of China, calling on Beijing to respect the human rights of the Uyghur people and other Muslim minorities and to grant the United Nations and other independent observers unfettered access to the region.

"The leaders of Australia and New Zealand ... made irresponsible remarks, severely violated international law and basic norms of international relations, and grossly interfered in China's internal affairs," said Wang at a regular briefing.

Activists and U.N. rights experts say at least a million Muslims have been detained in camps in Xinjiang. The activists and some Western politicians accuse China of using torture, forced labour and sterilisations.

China initially denied detention camps existed, but has since said they are vocational centres designed to combat extremism. In late 2019, China said all people in the camps had “graduated”.

In Hong Kong, Beijing has clamped down on political protest, introducing a new security law in 2020 that criminalises what it considers subversion, secessionism, terrorism or collusion with foreign forces.

Australia's ties with China have deteriorated since Australia led support for an independent inquiry into the origin of the COVID-19 pandemic.

China has in recent months moved to restrict imports of Australian products such as barley, wine and beef, with the World Trade Organisation saying last week it would establish a dispute settlement panel to resolve the barley row.

Ahead of Morrison's visit, New Zealand said it would back Canberra in the spat.

Australia's Prime Minister Scott Morrison arrived in New Zealand on Sunday for high-level talks hours after the country's government chose to support Canberra in its dispute with China on barley tariffs, signalling good will to work on differences in how to approach Beijing.

Quarantine-free travel between Australia and New Zealand began last month after both nations controlled the spread of COVID-19, allowing Morrison and Prime Minister Jacinda Ardern to meet face to face for the first time in 15 months. 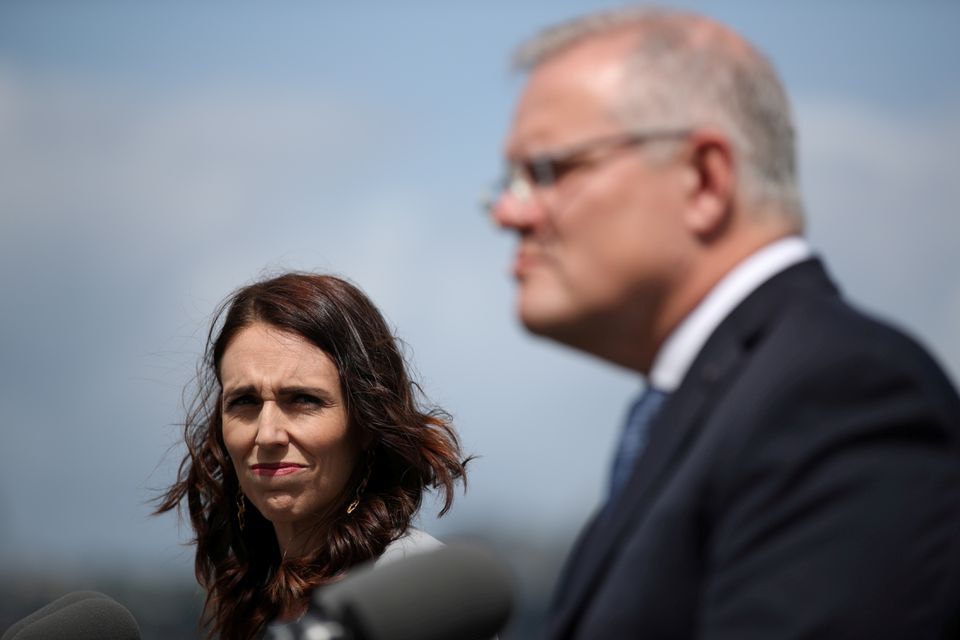 The talks were likely to be challenged by differences over China, the biggest trading partner of both countries, with Australia at loggerheads with Beijing and New Zealand taking a more accommodating approach.

China has in recent months moved to restrict imports of Australian products such as barley, wine and beef, with the World Trade Organisation saying on Friday it would establish a dispute settlement panel to resolve the barley row.

Ahead of Morrison's visit, New Zealand Trade Minister Damien O'Connor said his government was backing Canberra in the spat.

"New Zealand is participating in this dispute as a third party because it raises systemic issues of importance to the effective functioning of the multilateral rules-based trading system," local media cited O'Connor as saying.

"New Zealand was not asked to join as a third party, however we have been a third party in over 60 WTO cases since 1995 and it's not unusual for us to join actions disputes when we see challenges to international trade rules."

Australia's ties with China have sunk to their lowest point in decades in the past 18 months after Morrison led calls for a global enquiry into the origins of COVID-19 and Australia barred Chinese tech giant Huawei Technologies Co (HWT.UL) from its 5G network.

New Zealand's economic ties with China have been strengthening, with the two countries this year upgrading their free trade agreement.

New Zealand also said last month it was "uncomfortable" with expanding the role of the Five Eyes, a post-war intelligence grouping that also includes the United States, Britain, Australia and Canada. This raised speculation that Wellington did not back the group's recent criticisms of Beijing. read more

China has accused the Five Eyes of ganging up on it with statements on Hong Kong and the treatment of Muslim Uyghurs in Xinjiang.

Formal talks between Ardern and Morrison, expected to be dominated by China and its growing influence in the region, are to take place on Monday.