The Prime Minister has apologised for poor social distancing after she was critiqued for breaking protocols by taking a selfie with members of the public.

Jacinda Ardern was on the campaign trail in Palmerston North on Thursday when a group of fans and her took a photo together.

"New Zealanders will be asking whether Jacinda Ardern is part of the team of 5 million after she clearly flouted the rules she has asked us to live by," Seymour said.

"Ardern was photographed on Thursday taking a selfie with at least a dozen people in close proximity to her."

"All the way through on the campaign trail and even before during alert level settings, I worked really hard not to shake people's hands, I sanitise, I wear my mask in Auckland and I work hard to try and keep my social distance," she told reporters.

"In that particular photo, I did make a mistake, I should've stepped further forward, I should've asked them to step apart from each other, and I acknowledge that."

She added she tries in every circumstance to follow COVID-19 rules. 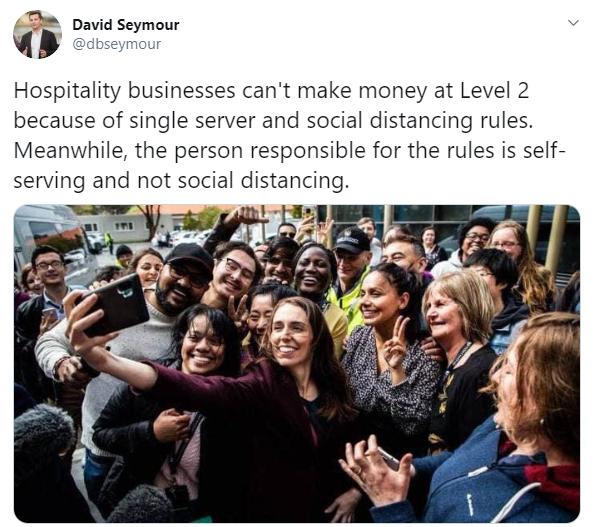 He added that hospitality businesses are struggling with the current single server and social distancing rules, "meanwhile, the person responsible for the rules is breaking them".

"Small business owners will be incredibly angry," he said

"I'll often step aside in photos to try and keep distance, and that's just something I'll just keep up when I'm in those places where we need to keep that distance up."

Social distancing is required while New Zealand is at alert level 2. People are asked to keep a two-metre distance while in public and a one-metre distance in 'controlled environments' such as cafes, restaurants and gym.