Coronavirus COVID-19 has been declared a pandemic by the World Health Organization.

"We have therefore made the assessment that COVID-19 can be characterised as a pandemic."

According to a 2010 report, a pandemic is defined by WHO as the worldwide spread of a new disease. WHO has never before seen a coronavirus spark a pandemic. Instead, pandemics typically originate from animal influenza viruses.

The director-general said "pandemic" is not a word the organisation uses lightly and does not change WHO's assessment of the threat of the coronavirus. He maintains it can be controlled if the right measures are put into place.

WHO has previously called coronavirus COVID-19 a global health emergency.

New Zealand Director-General of Health Dr Ashley Bloomfield has previously said Aotearoa was preparing for a pandemic, with clinical equipment like masks, aprons, gloves, eye protection, syringes and IV fluids set aside and ready to be used if necessary.

"We are doing this preparation to put ourselves on a footing that if a pandemic were to be declared, we would be ready to go and modify our response accordingly in a timely way," he said in February.

Dr Bloomfield said on Wednesday that New Zealand, which has five confirmed cases of the virus and two probable, still has a low risk of community transmission. He warned people, however, to be vigilant and not go to large public gatherings if they feel even slightly unwell.

The virus only causes mild symptoms in some people, meaning it is often disregarded by people as the flu. In other people, particularly the elderly or those with pre-existing health conditions, it can be serious and potentially fatal.

Officials are in the process of tracking down all close contacts of those confirmed Kiwi cases. They are put into isolation for the 14-day incubation period. More than 9000 people have self-isolated overall in New Zealand. 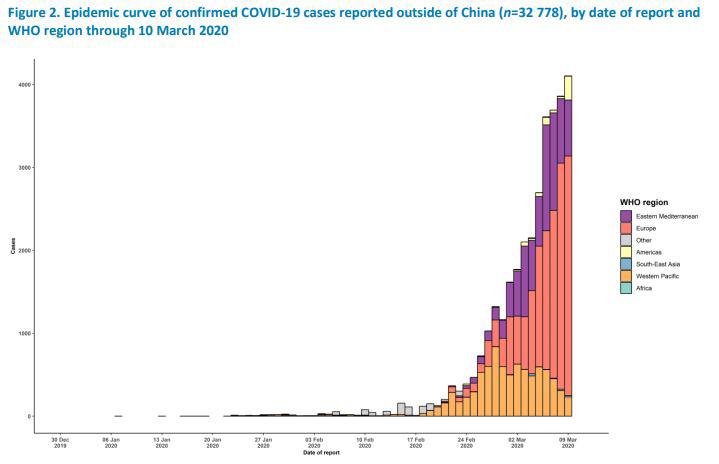 The number of cases recorded outside China every day to March 10. Photo credit: World Health Organization.

At least 120,000 cases of the virus have been recorded worldwide, with 4300 having died. The majority of cases have been recorded in China, where the illness originated, with 81,000. Italy, which went into lockdown on Tuesday, has 10,000. Iran has reported 9000, while South Korea has recorded 7700.

Dr Ghebreyesus said WHO expects the number of cases, deaths and affected countries will climb higher.

"We cannot say this loudly enough, or clearly enough, or often enough: all countries can still change the course of this pandemic," he said.

"If countries detect, test, treat, isolate, trace, and mobilise their people in the response, those with a handful of cases can prevent those cases becoming clusters, and those clusters becoming community transmission.

"Even those countries with community transmission or large clusters can turn the tide on this virus."

The Guardian has collated several reactions from UK experts.

Professor Mark Woolhouse, a professor of infectious disease epidemiology at the University of Edinburgh says "sustainable" action needs to be taken by countries fighting the virus.

"It is now clear that COVID-19 is going to be with us for a considerable length of time and the actions that we take must be actions that we can live with for a prolonged period," he is cited as saying.

Dr Michael Head, a senior research fellow in global health at the University of Southampton, says the use of the word "pandemic" may push countries towards more drastic preventative actions.

"The declaration of a pandemic may mean that we see countries feel incentivised to implement further larger interventions, such as banning of public gatherings, sooner than would they were otherwise planning to."

The New Zealand Influenza Pandemic Plan: A framework for action (NZIPAP), which was last updated in 2017, guides how New Zealand responds to an outbreak.

In the case of a virus spreading throughout New Zealand, the Government could consider exercising "special powers" to be authorised by the Ministry of Health, or by an epidemic notice, or where an emergency has been declared.

Those 'special powers' include:

The Government's pandemic plan takes lessons learned from the 2009 'Swine Flu' response, and looks even further back to the three major flu pandemics in the 20th century, reaching New Zealand in 1918, 1957 and 1968.

On Monday, Prime Minister Jacinda Ardern announced ships and aircraft could be quarantined.

Beyond a raft of economic proposals, the Government has introduced travel restrictions in an attempt to limit New Zealand's exposure to the virus. People who have travelled through or from China or Iran cannot enter Aotearoa unless they are NZ or Australian citizens or residents, while those from Italy or South Korea must self-isolate for 14 days.

What we know about coronavirus

Coronavirus is primarily spread through droplets in the air after someone sneezes or coughs. However, it can also be contracted by touching surfaces where the illness is present, according to the World Health Organization. The length of time the virus stays alive on surfaces is unknown at this stage, but some viruses can remain active for days.

The WHO was first informed of cases of the virus in Wuhan on December 31. It was identified as a coronavirus on January 7 and can spread through human-to-human transmission.

"Common signs of infection include respiratory symptoms, fever, cough, shortness of breath and breathing difficulties. In more severe cases, infection can cause pneumonia, severe acute respiratory syndrome, kidney failure and even death," the WHO says.

"Standard recommendations to prevent infection spread include regular hand washing, covering mouth and nose when coughing and sneezing, thoroughly cooking meat and eggs. Avoid close contact with anyone showing symptoms of respiratory illness such as coughing and sneezing."

There is currently no vaccine for the sickness.

How can I protect myself?

A full explainer on protecting yourself from coronavirus can be found here.

The Ministry of Health is reminding the public to get in touch with Healthline on 0800 358 5453 if they have symptons or concerns.